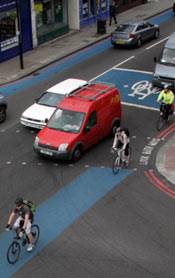 They are just one part of the Mayor's cycle revolution which aims to make travelling around on two wheels safer and easier for Londoners and visitors.

Along the first two Barclays Cycle Superhighway routes, cycling has increased by up to 70 per cent.
Country:
United Kingdom
Topic:
Clean and energy-efficient vehicles