Murtosa is the leading cycling city of Portugal 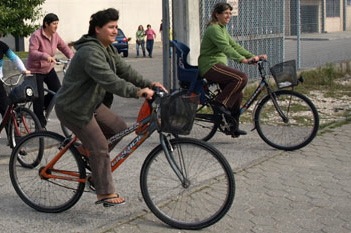 The cycling network in the City of Murtosa, Portugal, already exceeds 26 kilometres, according to the data released by the Municipality. The city has the highest percentage of bicycle use as a mode of daily transport in Portugal.
The cycling network from the City of Murtosa in the Aveiro district, comprises about 16 kilometres of mostly urban tracks, to which another 10 kilometres of mixed roads have been added.

Final data from the 2011 Census placed the City of Murtosa on top of the hierarchy in the country, with the highest percentage (16.9%) of the active population using the bicycle as their primary means of transport for the daily commute from home to work or to school and university. Murtosa is followed by Ílhavo with a percentage of 9.7% and Estarreja with 6.8%.

It is to be noted that this indicator only reflects the use of bicycles as a mode of transport and mobility, for the active and working age population. It does not include the elderly, who represent an important sector of bike users.

The city of Murtosa has seriously invested in promoting cycling through the project Murtosa Cycling, as a strategic development plan. It was based on two fundamental aspects: on the one hand the appreciation of bicycles as an environmentally-friendly, healthy and economically beneficial alternative to the car, and, on the other hand, as a privileged way to discover the city’s environmental and cultural heritage.