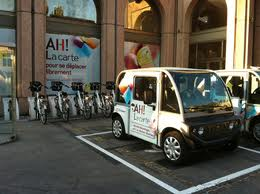 In Montbéliard (Doubs), it is now possible to rent a bike or electric car, or to take the bus with the same prepaid card.
The same 15 euro card allows the user to take the bus 15 times, ride a bike for 600 minutes, or drive an F-City (a locally designed and made electric car) for 110 minutes. One can also chose a 60 euro monthly package. Toowup, the company running this service, explains that “the general idea is that people can go and buy travelling time at their local news stand as they now do for prepaid phone cards”.

There is another specificity to this “Ah ! La carte” system: cars, i.e heavy quadricycles equipped with GPS devices, can be taken from, and returned to, any parking space in the town centre.

All it takes is a phone call to an operator who will tell the user where the closest vehicle can be found. An ordinary driving license is enough to use the cars. This multimodal service is the first of its kind in France, and was launched with a fleet of eight bikes and five cars.

The urban area of Montbéliard has invested 418.000 euros in this operation, including financial support of 35.000 euros from the Ademe (Agency for the protection of environment and energy management). A little more than 180.000 euros will be devoted to running this service over 2 years.