Modern interchange at the historic railway station in Swidnica (Poland) 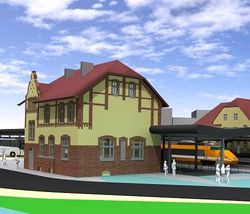 Building an interchange centre was a priority task for the city of Swidnica in southwestern Poland. The construction of the interchange has been ongoing for two years but the principal works on the historic railway station are just about to start.
The project includes the integration of the former bus station with the railway station, making public transportation more passenger-friendly. The most important and expensive part of the plan is the renovation of the historic railway station. Among other facilities, a passenger service, a restaurant, lounges with a summer garden and a city parking office will be located in the building.

The project also involves the construction of a new bus station. The former location of the bus station will be used for a car park. In the last part of the project, a new tunnel will be built under the railway tracks to provide easy access and transfer between the trains and the buses.

The new interchange centre will generate more public transport services, mainly train connections with the capital of the region, Wroclaw. The centre will operate both local and regional public transport (both state and private owned services). It is estimated that the number of passengers using the station will reach about 460,000 annually.

The total cost of the investment is over around €6 million (25 million PLN). Around €4 million (16 million PLN) comes from the EU under the Regional Operational Programme.