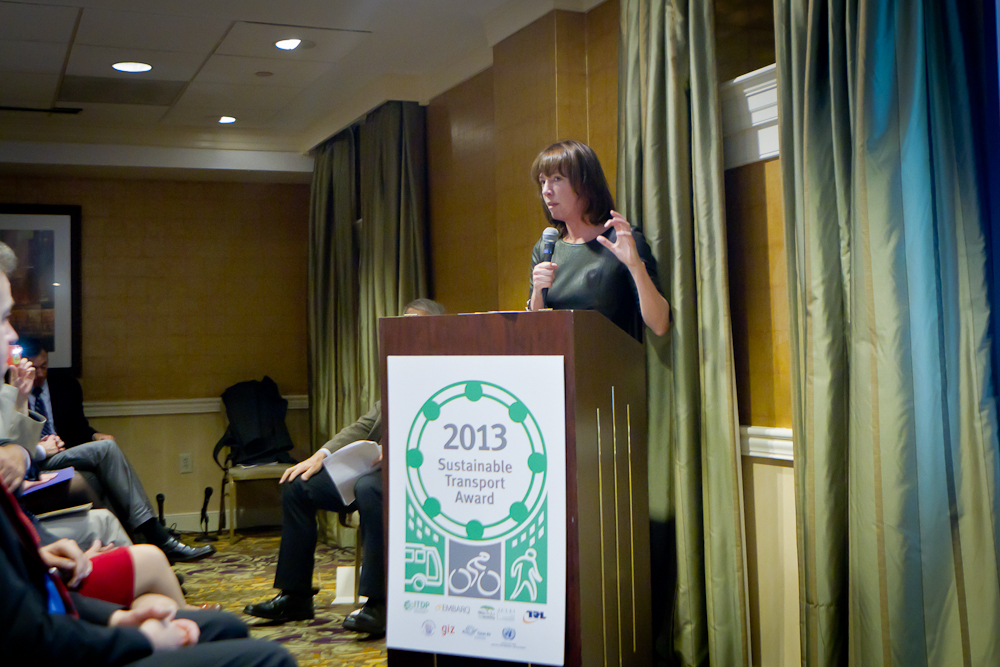 ITDP awarded Mexico City the 2013 Sustainable Transport Award for its Bus Rapid Transit (BRT) system, cycling and walking infrastructure, parking program, and revitalization of public space.
Established in 2005, the Sustainable Transport Award recognizes leadership and visionary achievements in sustainable transportation and urban livability, and is presented to a city each January for achievements in the preceding year.

The Sustainable Transport Award was presented to Mexico City on January 15, 2013 at an awards ceremony during the annual meeting of the Transportation Research Board, one of six major divisions of the U.S. National Research Council. ITDP board president and former Mayor of Bogotá Enrique Peñalosa presented Mexico’s Minister of Transport, Rufino Leon, and Minister of Environment, Tanya Muller with the award. The former Mayor of Mexico City, Marcelo Ebrard, who oversaw much of Mexico City’s sustainable transport projects, made closing remarks at the ceremony. Janette Sadik-Khan, Commissioner of the New York City Department of Transportation, delivered the keynote address.

Mexico City has implemented many projects in 2012 that have improved livability, mobility, and quality of life for its citizens, making the Mexican Capital a best practice for Latin America. The city expanded its BRT system, Metrobus, with Line 4, a corridor that extends from the historic center of the city to the airport. It also piloted a comprehensive on-street parking reform program (ecoParq), expanded its successful public bike system (Ecobici) and revitalized public spaces such as Alameda Central and Plaza Tlaxcoaque.