Mayor of Paris to battle traffic and air pollution (France) 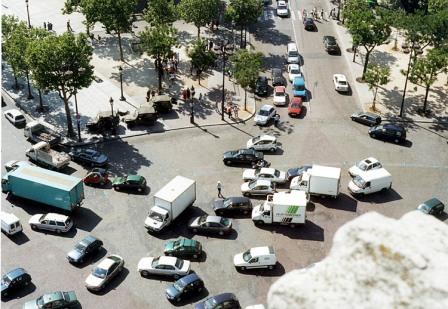 By presenting a comprehensive action plan which aims to ban cars older than 17 years from Paris, the mayor of Paris, Bertrand Delenoe, wants to reduce traffic and air pollution in his city. Paris follows London, Stockholm and Milan in planning to introduce a Low-Emission Zone in the city and its suburbs.
Every major city deals with the common problem of too much traffic and the resulting negative effects on air quality. Following the example set by London, Stockholm and Milan, city officials and the mayor have developed a comprehensive scheme to handle these problems, presented to the government on 12th November this year.

The core of this scheme is the implementation of a Low-Emission Zone (LEZ) for the city of Paris and its surrounding suburbs, which bans cars older than 17 years, but also lorries older than 18 years and motorcycles older than 10 years within this area. The mayor is also in favour of implementing a city toll, which will not set a price for entering the zone as usual, but which will be levied on the number of kilometres driven on the city's motorways.

These are not the only measures planned. The action plan is also set to reduce the speed limit on the city motorway “Peripherique” from 80 to 70 km/h, and on main roads in Paris, such as the Avenue de Clichy, to 30 km/h. This part of the plan is highly criticised as many people argue that because of the high traffic density and “stop and go” traffic, the speed limits are barely reached, let alone exceeded.

Also, in order to prevent car driving becoming a luxury for commuters from the suburbs, the mayor has offered the accompanying measure of introducing a bonus when scrapping a car, as has been done in Germany.

Mobility behaviour in Paris has dramatically changed in the past years. The bicycle rental system “Vélib” has proven to be popular, already counting 250,000 customers. In the past 10 years 40% of the population of Paris has shifted from the car to public transport or the bicycle. Only 7% still use the car on a daily basis. This change hasn’t come entirely voluntarily, though, since room for cars on streets and parking has been reduced by 75 ha in the past 10 years in favour of pedestrians, cyclists and public transport.