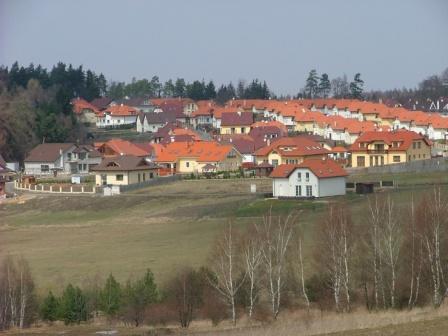 Czech environmental authorities hope to curb ill-considered suburban sprawl by mapping areas poorly served by public transport and other vital amenities.
The Czech Republic’s Ministry of Environment, which will produce the map, says it will highlight those places where no new houses should be built.However, local authorities say that the map itself won’t help matters without new legislation allowing them to ban bad developments.

Since the opening of the free market in 1989, satellite towns outside Prague and other large Czech cities have sprouted up like mushrooms. However, many developers have ignored the need for necessary infrastructure and services, including public transport connections.
The ministry will map all areas larger than five hectares and assess them according to several criteria, such as how much high-quality farmland a planned housing development would displace, the threats it would pose to animal species, as well as the level of access to shops and restaurants, schools, transport and other amenities. Tracts of land where no further housing development should be approved would be marked with red dots.

The map, to be completed within a year, will be at the public disposal. It will serve clerks who are in charge of zone planning and people who are deciding where to build their family houses, said Jiri Mach, a section head at the Environment Ministry. In the future the ministry would like to push through a law that would ban housing development in these localities completely, Mach said.

Municipalities say that such a law will be needed to effectively address the problem. We have the zoning plan approved by the past management and there are quite many places designated for housing development in it. Consequently we cannot prevent developers' projects, said Dalibor Wijas, mayor of Jesenice near Prague, a town of 7,000 inhabitants, 5,000 of whom live in a new satellite.