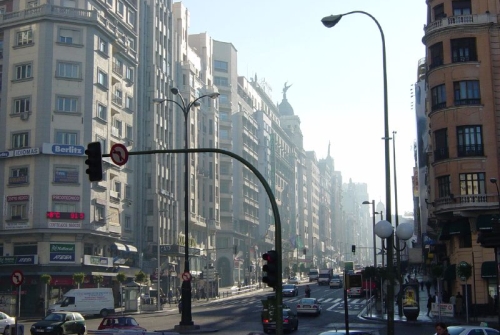 Seeking to move away from its image as a traffic-choked city, the Spanish capital aims to revolutionise its road usage.
Madrid (Spain), well known for its heavy traffic, is taking a radical step to overhaul its crowded city streets and reclaim them for pedestrians, public transportation, and cyclists. A General Urban Plan has been developed which promises to turn the city centre into a leafy pedestrianised zone, where traffic jams will be a thing of the past.

Twenty-four of Madrid’s major streets will be redesigned with the removal of car lanes, the addition of cycle paths and the the planting of trees along the routes to keep them shaded and cool. Roughly 66 percent of the street surface will be designated for pedestrians, who will be at the top of a new hierarchy followed by public transportation, cyclists, and cars.

The city is taking action immediately to reduce the number of cars driving in the urban centre by selling and redeveloping over 20 000 state-owned parking spaces. Despite a decrease of 2.5 percent in car use in 2012, the city is doing more to encourage citizens to walk by giving incentives to building owners who install shaded arcades and awnings over pavements.