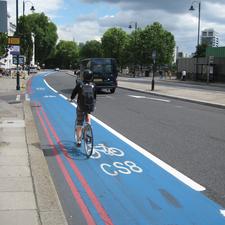 A new 15-mile east-west cycle route across London, with substantial segregation from motorised traffic, is the centrepiece of London mayor Boris Johnson’s cycling vision published this week.
The mayor said the ‘Crossrail for the bike’ would run from the western suburbs through central London and on to Canary Wharf and Barking.

The route would use ‘Dutch-style’ segregated cycle tracks in places, including along Victoria Embankment and the elevated Westway flyover that carries the A40 into London past Paddington. One of the six lanes on the Westway will be converted to a cycleway – the mayor says this can be accommodated because traffic levels on the road have dropped 22% in the last decade.

Johnson said the central section of the route would be completed by 2016.

The mayor pledges more segregated cycle lanes and more ‘semi-segregation’. The latter could be shared bus and bike lanes or wide mandatory cycle lanes separated from other traffic by measures such as ridges, cats’ eyes, or rumble strips.

Approaches to advanced stop lines will be segregated at some busy junctions.

The mayor is also promising “substantial improvements to both existing and proposed Superhighways”, including some re-routings onto secondary roads.

Working with boroughs, a Central London grid of bike routes will be created using segregation, quiet streets and two-way cycling on one-way streets. The first planning conference for the grid will take place next week.

20mph speed limits will be implemented on several parts of the Transport for London Road Network where cycling improvements are planned.

The mayor also plans to spend £100m on improving cyclist safety at junctions. The money will be focused on fewer sites than originally planned to enable more significant improvements to be delivered.