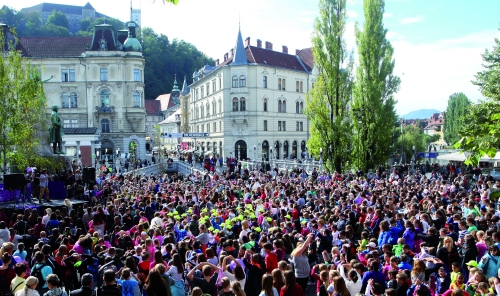 The Slovenian capital city of Ljubljana has won the European Green Capital Award 2016, with the jury highlighting the city's achievements in sustainable mobility as a strong factor in its decision.
Janez Poto?nik, the EU’s Commissioner for the Environment who presented the award to a delegation from the city, said:

'I very much look forward to Ljubljana’s year as the 2016 European Green Capital. All of the finalists of this award provide us with valuable real-life examples of how respect for the environment, excellent quality of life and economic growth can all be successfully combined.'

Part of Ljubljana's success has been its shift in transport focus to environmentally friendly alternatives. In 2013 Ljubljana implemented measures to limit traffic in the city centre and give priority to pedestrians, cyclists and public transport users.

The city's popular bike-sharing scheme, BicikleLJ, has been used for 1.6 million journeys since it was introduced in 2011. In 2012, Ljubljana adopted goals that would see residents using public transport and non-motorised modes more than private cars by 2020.

The European Green Capital Award is an annual event that promotes and rewards the efforts of cities committed to improving the urban environment. Winning cities demonstrate a record of achieving high environmental standards and commit to ambitious goals for future progress in sustainable development.

This year's ceremony took place on 24 June in Copenhagen, Denmark, which was the European Green Capital for 2014.