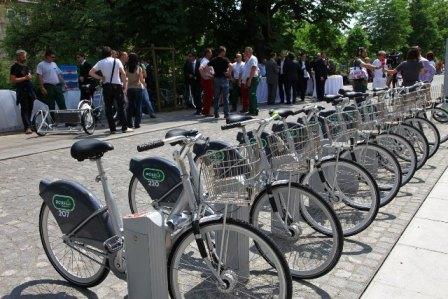 
Launched on the 12th of May, users will be able to pick up one of 300 bicycles from 31 terminals covering an area of approximately 12 square kilometres in a network where the terminals are separated by no more than 500 metres. The system is hoping to tap into Ljubljana's 100,000 daily commuters of which 45,000 are students. This could revolutionise the way the capital tackles urban transport, and may see a big modal shift in favour of bicycles in a population of 275,000. It is expected there will be a knock-on effect to the rest of Slovenia, which currently has 6.9% of the population using bicycles as a main mode of transport (Eurobarometer 2012).

The bicycles being used are the same as in Vienna: the project is a joint venture between the Municipality of Ljubljana and the advertising company Europlakat (a partner of J.C. Decaux). Obtaining membership is simple (purchased with a credit card). The first hour is free of charge, the second is €1, the third €2 with each additional hour costing €4. Unlike public transport, the system is operable 24 hours a day throughout the whole year.