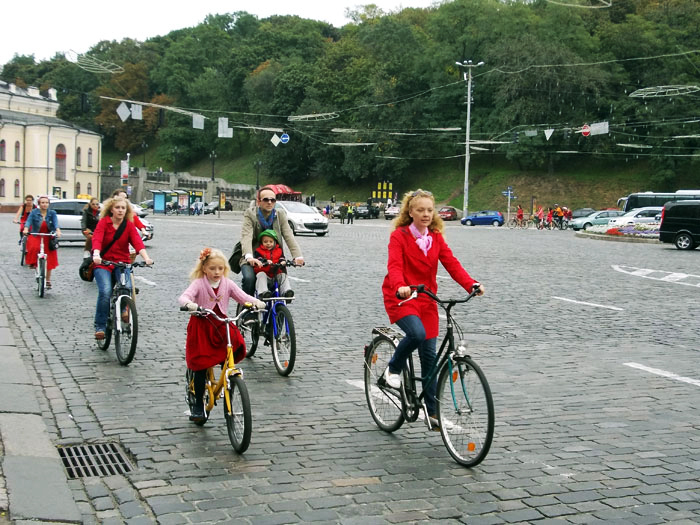 The anticipated result of the Kyiv Cycling Concept is growth in the daily modal share of cycling from 0.25% to 5% (an estimated growth of 160 to 200 000 cyclists). The Concept contains all necessary information for the development of cycling infrastructure in Kyiv, including:
- maps of over 1000 km cycling routes (urban and suburban infrastructure, recreational routes)
- projects of cycling parking facilities in residential areas, next to metro stations and at destinations.

Kyiv Cycling Concept includes recommendations for the improvement of the legal framework and suggests changes in the municipal management system introducing unit(s) responsible for quality implementation of the Cycling Concept. The document contains a brief list of measures and events, which have already been implemented in the city. The full text of the Kyiv Cycling Concept (in Ukrainian only) is available at http://bit.ly/2fOyJlW. An English summary is available from; https://goo.gl/zTgJ4z.

‘Kyiv Cycling Concept is based on the working documents of Kyiv Cyclists’ Association. In 2015, the Association started working on the first map of bicycle routes, engaging community members who used bicycles as an everyday transportation mode. 'We found a lot of foreign experience examples and resources, and based our recommendations on them’, says Ksenia Semenova, the Policy Advocacy Co-ordinator of NGO Kyiv Cyclists’ Association in Kyiv and Adviser to the Kyiv City Mayor on cycling infrastructure development. In 2016-2017, public discussions of the Cycling Concept took place, to take position and vision of the community into account. The first stage of public discussions started in October 2016.

The Kyiv Cycling Concept must become an integral part of the Kyiv Sustainable Mobility Plan. The Concept’s measures will also be included in the Kyiv Master Plan, the Integrated Transportation Scheme, the detailed plans of neighbourhoods, and into other planning documents.

To receive the financial support from the city budget, the Cycling Concept should become a basis for the future Municipal program on the Cycling Development. Also, it should be taken into account when planning municipal budgets in 2018-2025, and planning street redesign.

The news translated from Ukrainian by Iryna Bondarenko