Intermodality on the rise in Austria – new report 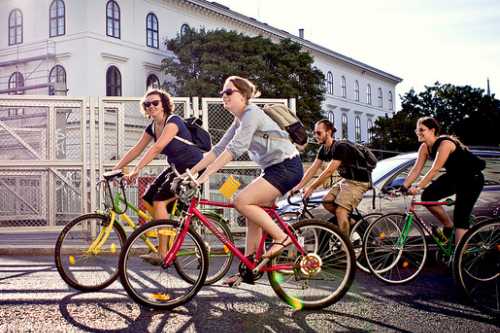 The majority of Austrians are combining different forms of transport on their journeys thanks to new technology and integrated transport hubs, a new report says.

According to ecomobility experts VCÖ, over half of Austrians use public transport, 70 per cent cycle and eight out of ten use a car at least ’occasionally’. Ninety per cent walk either every day or several times a week.

The VCÖ says this is thanks to transport hubs making links to other forms of transport – including providing sheltered bicycle parking and car- and bike-sharing facilities – and up-to-date transport information that is accessible from smartphones.

‘The vast majority [of Austrians] frequently use combined [modes of] transport on individual routes,’ said the VCÖ‘s Markus Gansterer - who also told the Kleine Zeitung that dividing travellers into groups of ‘drivers’, ‘pedestrians’ and ‘cyclists’ is becoming increasingly obsolete.

Gansterer warned, however, that in many rural areas in Austria the choice of different modes of transport is ‘extremely low’. The report states that access to public transport is not possible for around 700 000 Austrians.

The VCÖ is calling for better transport connections in those areas, particularly to supermarkets and shopping centres.

For more information read the VCÖ’s summary of the report (in German).