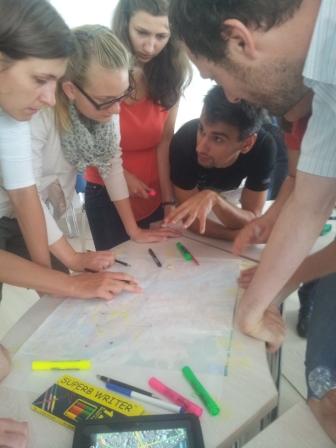 Recently, architects, engineers and officials from the Kiev City State Administration, the Kiev Association of Cyclists and the German Technical Cooperation (GIZ) joined together in a workshop to define cycling routes in Kiev.
The Start Project aims to create a safe and comfortable environment for cyclists in the Darnitskii residential area of Kiev (capital city of Ukraine). On July 23-25th 2013, representatives of the Association of Cyclists of Kiev, Kiev City State Administration and its departments, German Technical Cooperation (GIZ) as well as architects and engineers gathered to define a cycling route network as well as to elaborate on the detailed design of cycling infrastructure.

During the first day, the workshop participants cycled on roads and on cycle tracks in the Darnitskii area and analysed them. Based on these findings, the team created a map of points of origin and destination, matched points of interest, and then looked for options to establish a dedicated cycling network based on the existing network of roads and streets under the criteria of “cyclability”. The work of participants was inspired by the German design standards for cycling infrastructure (ERA), which are available now in the Ukrainian language.

Experts from other Ukrainian cities joined this workshop and expressed interest in further cooperation. The first results of this work will be presented to the city administration and residents during the European Mobility Week in Kiev, which will be held 16-22nd September 2013.

GIZ’s support is implemented in the framework of the project “Support to municipal administrations of the EURO2012 host cities” on behalf of the Federal Ministry for Economic Cooperation and Development (BMZ).