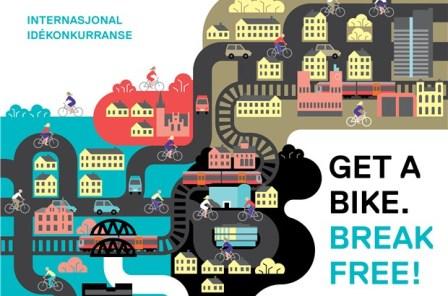 FutureBuilt invites the public to take part in the ideas competition Get a bike. Break free!. The vision is to make Oslo one of the best cycling regions in Europe.
The bicycle is having a renaissance in European cities, but Norway is lagging behind. In Oslo only 7 - 8 per cent of people cycle to work. A new cycling culture must be created in the broadest sense. The questions to be answered are: How can we plan the Oslo region to ensure that the bike becomes the preferred means of transport, either by itself or in combination with the train or other public transport? How can we make at least 50 per cent of the population cycle to work? How can the bicycle contribute to developing thriving cities and a sustainable region?

The competition invites a broad range of participants: architects, landscape architects, transport planners, social scientists, concept developers, design and communication agencies, suppliers and non-governmental organisations. No formal competence is required; it’s the strength of the ideas that counts. Both Norwegian and international participants are invited. The full programme of the competition, together with lots of interesting facts and figures about biking in Oslo can be downloaded here