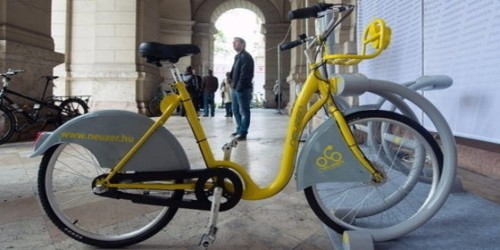 The Hungarian state is promoting a domestically produced bike-and-dock system, newly developed with EU subsidies, as the perfect technical solution for the capital city’s proposed bike-sharing system.
With the help of 25 million Hungarian forints (89,000 euros) European Union subsidy, Hungarian bike maker Neuzer developed the system, and it was presented last month in Budapest as the ideal technical solution for the upcoming Bubi bike sharing scheme.

In mid-September, city and government officials held a press conference to show off Neuzer's new suite of equipment, including bikes, docking stations and payment consoles. The system took the Esztergom-based company two years to develop at a total cost of 60 million Hungarian forints (213,000 euros).

Company President András Neuzer told the press that his developers looked at existing systems and created something new that eliminates their technical shortcomings. For instance, several theft-prevention features have been incorporated, including a GPS system that will track bicycle locations.

In general, however, the Neuzer system would work like others that have been implemented in hundreds of cities around the world in recent years. The bikes can be removed from the automated docking stations with a contactless card, used for short periods and returned to any other docking station in the city.

The Neuzer bike-sharing system was first shown off in 2011 at an international bicycling trade fare, Eurobike, in Friedrichshafen, Germany. Neuzer says several cities have expressed interest in its bike-sharing package, including towns in the Hungarian countryside.

Pál Völner, state secretary in charge of infrastructure at the Hungarian National Development Ministry, said that the Neuzer system and Budapest's proposed bike-sharing scheme (dubbed “Bubi”) have been developed in harmony with one another in the interest of fostering cycling as transport in the capital. Völner said Neuzer can apply for the equipment tender for Bubi, which is being implemented by BKK, Budapest's umbrella agency in charge of urban transport.

According to the BKK website, Bubi will comprise 1,000 bicycles at 75 docking stations clustered around the city centre. The scheme would launch in the autumn of 2013.

Neuzer would be at least the second factory in Hungary to produce technical equipment for bike-sharing systems. The Dutch-owned Accell Hunland, based in the Hungarian village of Tószeg, produced the original bikes for Paris's Vélib system.