How do buses represent democracy in action? 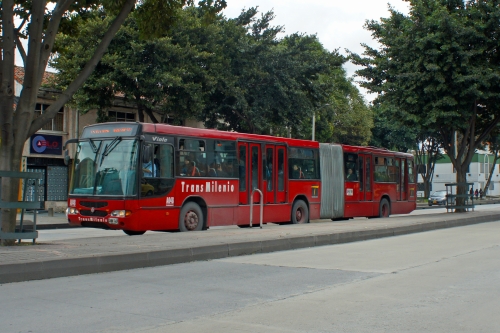 The former Mayor of Bogotá (Colombia), Enrique Peñalosa, recently gave a talk about the revolutionary changes he worked to institute during his term between 1998 and 2000.
One aspect of this was to redesign mobility in the city around people rather than cars. This is particularly noticeable in developing countries, which tend to prioritise the construction of infrastructure for those with private vehicles as opposed to those without them.

The TransMilenio rapid-transit bus network, with its own lanes and stations separated from other traffic, was developed as a solution to this problem in Bogotá. The idea to completely separate buses and private vehicles was based on a principle of equal road space for citizens. Peñalosa points out that this form of public transport is cheaper to develop and has excellent capacity for the rapidly growing cities of developing countries.

To watch the TED Talk, click here. A transcript is available in English.