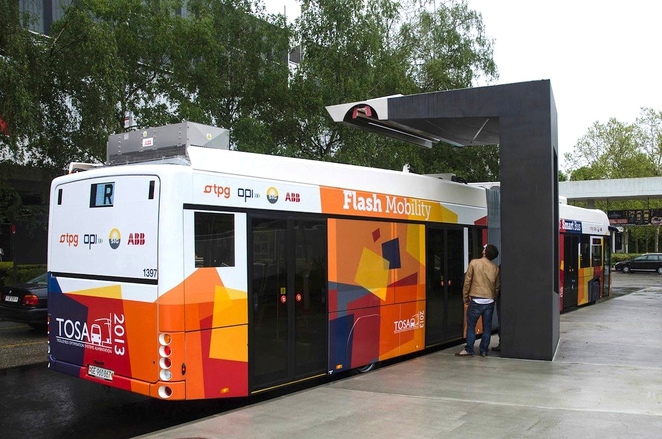 In Geneva, an all-electric articulated bus that charges within 15 seconds by ‘flash charging’ at bus stops is currently in operation. The bus, which requires no overhead wires, is charged by energy from hydropower, making the bus a zero-carbon-emission solution.
At certain stops, the bus gets a boost of 400 kilowatt while passengers are getting on and off. At the end of the bus line, the battery is then fully recharged within 3-4 minutes. Alternatively, the bus may also be charged at the depot within half an hour.

The receptacle on the bus is connected to a flash charger via a laser-controlled arm on the roof of the bus that only takes a second to connect. The charger installed at the station is 3 metres in length. For a demonstration of the technology, take a look at this short video.

The quick charging technology requires only a small battery, which is light and increases the energy-efficiency of the system. In addition, the battery recovers energy through regenerative breaking.

The bus has run as a pilot in the framework of the TOSA project. It can carry 133 passengers and is operating between Geneva airport and Geneva’s international exhibition centre, Palexpo.

Following the successful completion of the pilot, Geneva is looking into extending the project to longer routes.