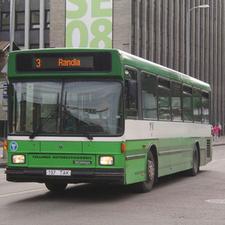 It’s a public transport practitioner’s dream experiment: what would happen if a city made its public transport completely free, permanently?
The Estonian capital Tallinn is finding out, because as of New Year’s Day, that is exactly what it has done.

The city’s local authority says the move will “safeguard social cohesion of local communities by granting equal mobility opportunities to all social strata.” It is hoped that car drivers will find it an incentive to switch to public transport, “thus reducing pollution and noise, and, in the long run, will improve living standards of all citizens.”

The authorities believe that free transport will help make the city more attractive for employees and investors, provide mobility to the unemployed and low income residents and enhance environmental credentials and performance prior to Tallin becoming European Green Capital in 2018.

Critics also note that the network will need further investment in its buses, trolley buses and trams if patronage rises significantly as part of the free travel scheme, requiring greater public subsidy. They have also suggested the whole project is a political stunt designed to shore up the political fortunes of Tallinn’s mayor Edgar Savisaar. Nevertheless, the move commands public support, being introduced after a referendum in 2012 showed a two-thirds majority in favour.

Although farebox revenue will fall, there will be some savings, as on-street ticket machines will be removed. And fares handling costs will drop too.

Early results suggest that patronage has not risen dramatically as many citizens already enjoy free fares under concessionary schemes. Car traffic has dropped by up to 10%.

Tallinn sees itself in the vanguard of a movement for free fare public transport systems, but it is not the first. Travel is also free in some small French cities, the largest being Aubagne and Hasselt in Belgium and Chengdy in China. And even New York city Mayor Michael Bloomberg believes that, in an ideal world, mass transit would be free. “If you were gonna design, keep in mind, the perfect public transportation system, you would have it be free and you would charge people to use cars, because you want the incentive to get them to do that,” said the mayor in September.

Free travel is only available for the 400,000 registered Tallinn citizens. Everyone else has to pay, just like before.