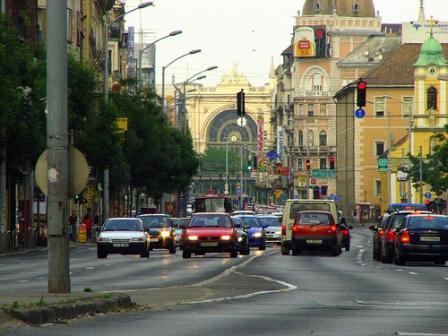 A long-debated proposal to implement a congestion charge in downtown Budapest has been fast-tracked as one of several strategies to contain Hungary’s budget deficit.
The idea was recently mooted as one of several taxes and fees to help stave off the financial collapse of public services. The new measures are all part of Szell Kalman 2.0, an update of a structural reform plan introduced by the government two years ago. According to the plan, the congestion charge would come into effect in July 2013.

The congestion charge has been the subject of perennial debate since at least 2007, when it was publicly proposed at an Earth Day event by the city’s previous mayor, Gabor Demszky. Demszky later backtracked on the plan, saying it would have to wait until a number of large transport investments had been made.

A significant public transport investment – Metro Line 4 – is due to open in the spring of 2014. However, little progress has been made on another supposed prerequisite, a ring of Park and Ride facilities outside the future congestion zone. A recent article on the Hungarian website origo.hu noted that an even more basic investment, the electronic “gates” necessary for toll collection and scheme enforcement, would be virtually impossible to procure and install in just a year’s time.

However, Szilárd Erhart, a long-time proponent of the charge and editor of dugodij.hu (“dugodij” being Hungarian for “congestion charge”), said he believed that the government’s push should at least hasten the charge’s implementation.