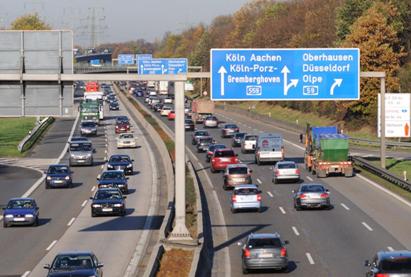 Planned activities include the extension of electronic traffic control to another 1000 km. Research has shown that by doing so the risk of traffic jams would be lowered and accident rates would be reduced by 30-50%. In the case of heavy traffic, the hard shoulders should also be temporarily opened to traffic. By active traffic management in 90 places, traffic will be diverted to alternative routes, which will lower traffic density. Furthermore, 30 highway junctions will be equipped with traffic lights to control traffic flow entering the highways. This will reduce the risk of accidents by approximately 40%.
Country:
Germany
Topic:
Traffic and demand management