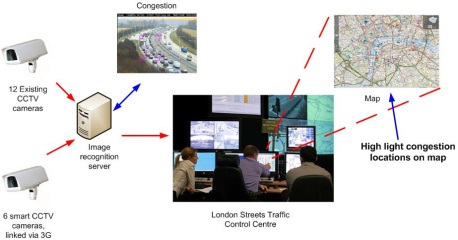 Six additional smart cameras have been set up on the London Olympic route network to keep the city moving. The application has been installed in the framework of the FP7 co-funded research project STADIUM. The lessons learned will culminate in an interactive ITS Online Guide.
Every day, 1,000 traffic cameras across the city deliver coverage in real time to the London Streets Traffic Control Centre (LSTCC). Operators observe the video images 24/7. While there is a natural limitation on how many staff can monitor cameras, the STADIUM demonstration allows automatic notifications of congestion along the Olympic route network to ensure access to the sports venues.

How? The demonstration provided yet another “set of intelligent eyes” when it processed data from 12 traffic cameras and 6 smart cameras. The smart video analytics alerted the team to issues and highlighted congested locations on maps. The video analytics and its impact response mechanism ensured that reliable journey times were maintained, even during periods of heavy traffic usage.

The FP7 co-funded research project STADIUM aims to improve the performance of transport services and systems during large events hosted by big cities. Intelligent transport systems (ITS) were demonstrated also at the 2010 FIFA World Cup in South Africa and the 2010 Commonwealth Games in India.

Lessons learned while applying ITS at these three large events will be shared in the STADIUM ITS Online Guide. This interactive electronic handbook supports the decision making process for the implementation of suitable technologies. The handbook can help cities to integrate intelligent transport systems in order to manage the transport challenges caused by large events. The Online Guide will be presented for the first time at the ITS World Congress 2012 in Vienna and will be made available to local authorities in 2013.