England to benefit from over 500 green buses (UK) 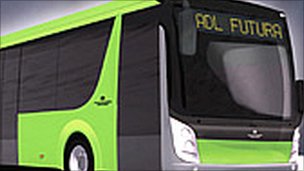 UK Government funding of over £46 million will see 542 new low carbon buses on roads across England by March 2012.
The money is been made available as part of the wider UK Government’s Green Bus Fund which allows bus operators and local authorities bid for grants to help them purchase new low carbon buses. Green, low carbon hybrid-electric buses supported by the Fund are already in operation in London, Manchester, Oxford and Reading. Electric buses supported by the Fund are operating in Durham.

UK Transport Minister Norman Baker said “My vision is for a transport system that cuts carbon and creates growth.....Low carbon buses emit around 30 per cent fewer greenhouse gas emissions than standard diesel buses and use around a third less fuel - that is why it was so important to kick-start the market.....“They also represent an important and developing industry - both in this country and throughout the world - which has the potential to create jobs and boost economic growth”.

It also links to the UK Government’s drive to target investment in new projects that promote green growth and encourage use of sustainable local transport. All English regions will benefit with funds which have been paid to 20 bus operators and 6 local authorities. All the buses are expected to be in service by 2012.
Country:
United Kingdom
Topic:
Traffic and demand management