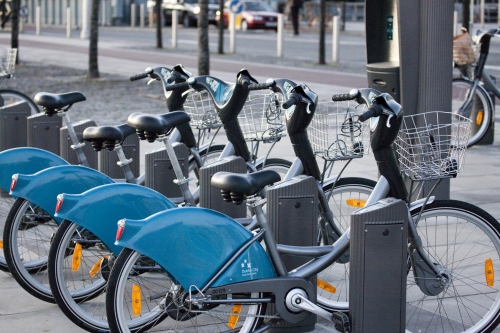 A Dublin councillor has called on the city to give cyclists priority at traffic lights during rush hour in an effort to increase the numbers of Dubliners commuting by bicycle.

Fine Gael councillor Paddy Smith has proposed a 'green wave' that would co-ordinate traffic lights so that cyclists travelling at 20 km/h could be sure of meeting a green light at an intersection.

The city's traffic manager has been called upon to introduce the system along the planned Dodder cycling route after a pilot scheme is completed.

Councillor Smith said: 'We are currently investing so much in our cycling infrastructure that it makes sense to do this now.

'What drivers need to realise is that the more people cycle to work, the less competition there is for road space.'

The Danish capital, Copenhagen, has implemented a similar system on three of its cycle routes. Green LED lights along the route help people to ensure they are travelling fast enough and will cross at a green light.

A study carried out after the system's implementation showed that there was little change on journey times for car and buses.

Councillor Smith also pointed out that existing cycle routes around Dublin's city centre could also be fitted with the system to expand the benefits of traffic-light priority to cyclists across the city.