Cycling needs to be higher on the agenda (Albania) 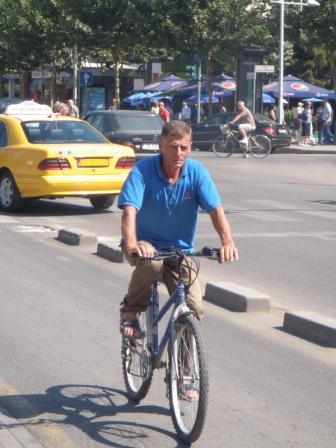 As shown by earlier Eltis case studies, there have been some promising developments primarily in the Albanian cities of Tirana and Shkodra, with cyclists reaching a modal share of 25%. However, as a general statement there is still a lot to be done to make cycling a mainstream way of transport in the country's cities.
At present, it is difficult to find statistics about bicycles in Albania. The Albanian Institute of Statistics, INSTAT, has no information about this means of transport, although it has statistics for all motorised vehicles. In another source, the UN statistics on international trade, we find that Albania imported bicycles and bicycle parts to the value of 3.7 million dollars between 2008-2012. This figure should be compared against the 880 million dollars which was spent on importing motor vehicles during the same time.

Not only that, Albanians import relatively few bicycles nor do they produce them. In the EU in 2011, 11 million bicycles were produced, with Romania and Bulgaria being the largest producer in South Eastern Europe, producing respectively 422,000 and 642,000 bicycles a year. Slovenia, a small country, produces 5,000 bicycles per year.

Presently, the bicycle seems to be the black sheep of Albanian transport modes. The desire of citizens to use it is great - primarily because of economic reasons - although in this difficult economic situation, the proportionally high spending on motor vehicles is even more striking. In general, road safety is very low. There are hardly any bicycle lanes and car drivers do not respect these in any case. With the exception of Shkodra, where polls show that bicycles are used by 25% of citizens and there are 40,000 bicycles in the city, other cities are weak in bicycle use.

Tirana, a city with the most opportunities for use, has promised 24 km of new bike lanes within the year - although this is yet to be seen. On the national level, the government is not particularly supportive of cycling either, as it is not even mentioned in the national transport plan. All in all, there have been some positive trends in some Albanian cities, but the general trend still needs to be reversed in favour of cycling.