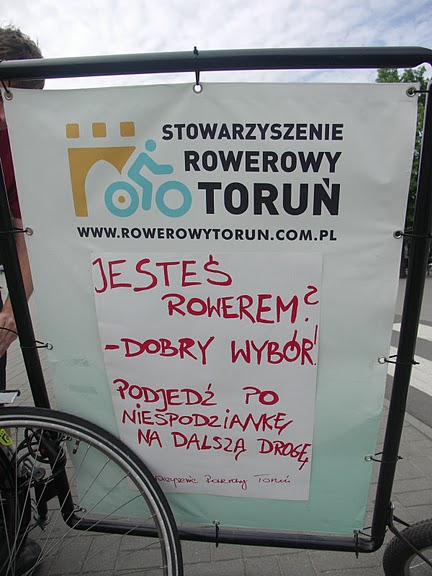 In June this year, the association ‘Rowerowy Toruñ’ (Cycling Torun) began a promotional campaign to encourage the use of bikes as a means of transport for city residents of all ages.
The action Rowerem do pracy i szko³y (“with the bike to work and school”) involves handing out candy and reflective bike stickers to cyclists on the street to thank them for choosing the bicycle as an everyday mean of transport in Torun.

The first action was carried out on Friday 10th of June at the Rapacki Square in Torun, where over 150 sweet gifts were handed out to the cyclists within half an hour. A similar action took place on Wednesday 15th June near the Daszyñski Square (250 snacks distributed within two hours). Both events were met with approval by the pleasantly surprised cyclists.

The action is not yet completed and will be continued in other parts of the city; it is carried out within a project funded by the municipality of Torun.