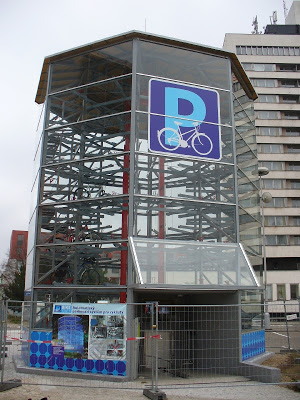 A Czech bicycle importer has installed an automated cycle parking tower at a railway station in the city of Hradec Kralove. The tower can hold up to 117 bicycles on seven tiers.
Velo, which imports cycles from Wheeler bicycles of Taiwan, has co-funded the building of a glass walled automated cycle parking tower at the Hradec Kralove rail station. Users pay for their parking via a ticket machine, which enables access and retrieval of the bicycle.

The mechanical aspect of the system consists of a central unit with cushioned aluminium paddles resembling human hands that hold the bike’s front wheel into its mounting cradle. The unit can turn 360º degrees and ascend to place the bike into a bay. The retrieval time is around 30 seconds. The system allows bikes to be parked with all its accessories, even allowing a cycle helmet to be left on the handlebars.

Robotised cycle parking systems are not unusual across Asia, where space is at a premium, they are used to maximise the amount of space available for storage.

In Tokyo, for example an automated facility consisting of two underground silos holding 144 cycles each has been in operation since 2008. Robotised parking has been used in some European countries such as Switzerland. Carousel cycle systems have also been tried in the Netherlands. But one of the main drawbacks to these systems is the length of stacking and retrieval times of around 45 seconds, said Daniel Mourek, the European Cyclists’ Federation vice president. This has tended to put off users. In addition the automated system is costlier than more high-density basic cycle parking.