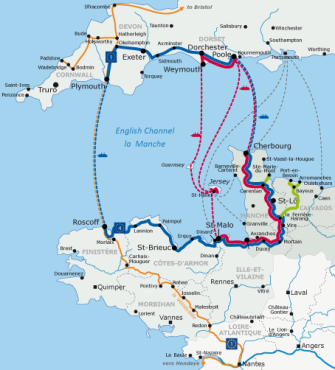 Colourful celebrations on both sides of the English Channel opened a new cycle route taking in 1200 km of some of the most beautiful countryside in South West England and Northern France. The Tour de Manche was completed as part of the ‘CYCLE WEST’ project.
Tour de Manche is a 1200km long itinerary; following the coastline of Brittany through the famous Pink Granite Coast and Cap Fréhel. It links up Brittany and Normandy to Dorset and Devon, two counties of South-West England boasting some of the most glorious seaviews and countryside.

Petit Tour de Manche is an epic journey along the Dorset Jurassic Coast and across the Channel to the Mont St-Michel, both sites classified as world heritage by UNESCO. Offering a visit to the Emerald Coast, the Vire Valley and one of France’s Regional Parks, you can stopover in beautiful Jersey or go on to discover the D-Day Beaches of Normandy.