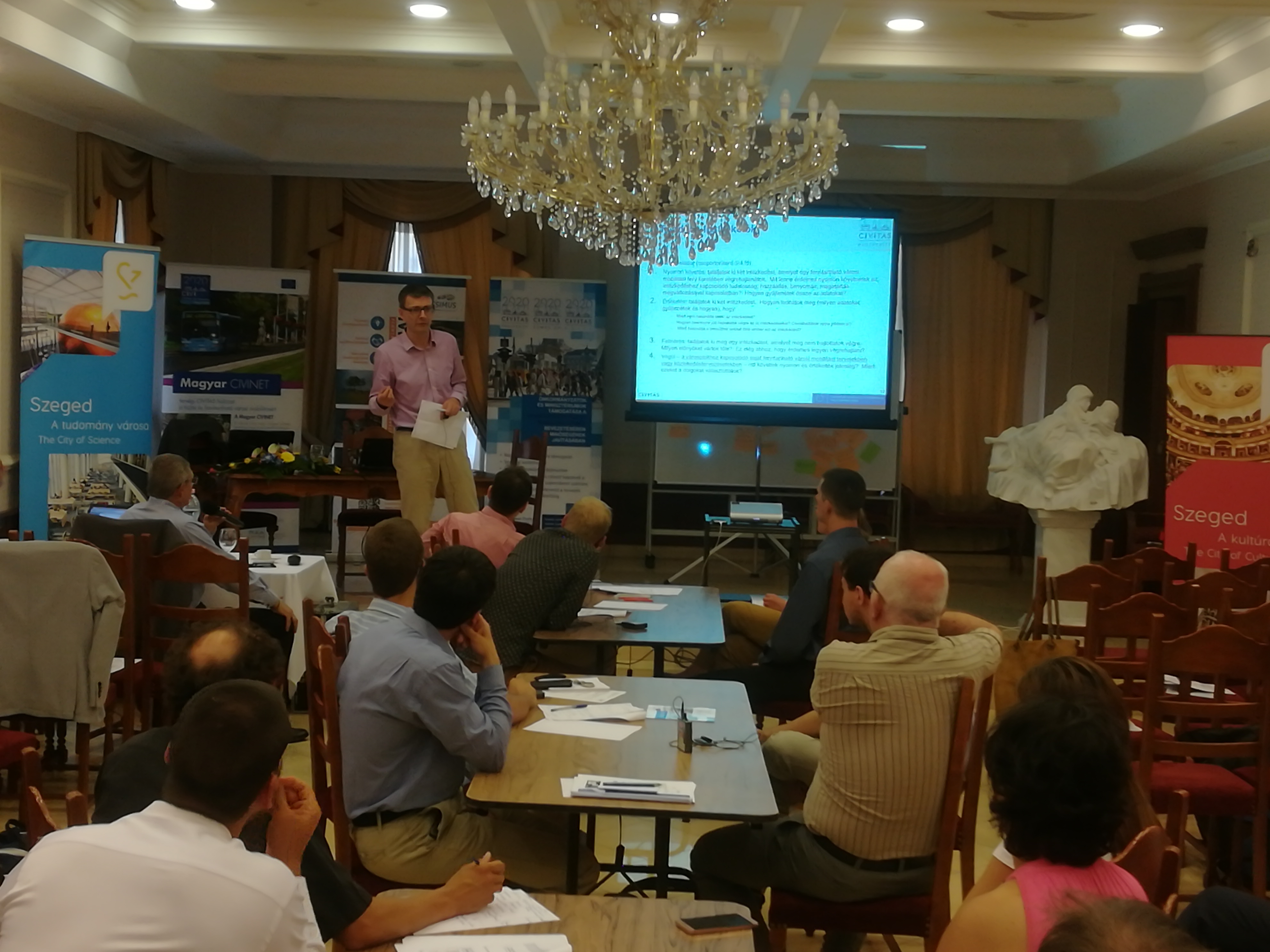 The first day started with informal networking that allowed participants to introduce themselves to each other, although some active members of the events of the Hungarian CIVINET Network already knew each other. On behalf of the host city, Dr. Miklós Oláh welcomed all participants. Mobilissimus were hosting the programme and they introduced the importance of the topic. Mr. András Ekés, the managing director of Mobilissimus, briefly described topics on the agenda. He gave a quick review of the experiences and main challenges regarding SUMPs and the approach of different cities. He formulated the main messages mainly for cities but also for all stakeholders. The main barriers were also introduced along with communication and social involvement aspects, however Mr. Ekés fully covered details in the separate session dedicated to communication matters. In addition, Mr. Ekés introduced the SUMP life cycle and common mistakes.

Mr. Gábor Sztanics, on behalf of the Managing Authority, gave information about the relevant EU and National Government co-funded calls, from which the preparation of SUMPs can be financed in Hungary. He showed the inner and outer drivers to prepare a SUMP. He also showed up the main insufficiencies of the prepared SUMPs in the eye of the Managing Authority. Also in the opening session Mr. László Dulicz, managing director of Mikroline, described what SUMP is: the existing policies, concepts and strategies of the settlements should be reconsidered in the aspect of sustainability. He covered stakeholders, social involvement & public participation, functional city region, evaluation of the existing transportation supply, complex evaluation of the impacts of developments and workplace mobility plans. Mr. László Dulicz emphasised that a SUMP should be upgraded again and again to ensure continuous improvement.

Following the opening session, participants took a city walking tour which lasted about 1.5 hours in the downtown of Szeged. The groups tourist guide – who was also hosting the event - Mr. Antal Polgár gave the history of the city.

From the second day on it was the foreign lecturers’ turn. In the morning Ms. Eglantina Dani held her lecture about the Use of ‘Urban Transport Roadmaps’ tool in SUMPs. She briefly introduced the project, then told the audience about the tool’s and the SUMP planning cycle’s matching points, the workout and evaluation of scenarios and illustrated this with definite urban examples. The aims and structure of the tool, the roadmap workout steps, the online presentation of the use of the software were on schedule. At the end the participants had the opportunity to try and experience the tool in small groups.

Afterwards, it was Mr. András Ekés’ turn to speak about communication and stakeholder involvement. Since Szeged had had its first coaching session in this topic presented also by Mr. Ekés, there were some elements, with which Szeged was already familiar with. He told the audience about the following topics: the main questions and motives of communication, the language, the reality of communication and the target groups. It should be highlighted that Mr. Ekés always gives everyday examples from real life to enable interactive discussion about why they are good or bad. This time it was the same with information sheets of the Budapest Transport Privately Held Corporation. Mr. Ekés went on to discuss communication strategies for residents, about the open problem discover survey, the communication of surveys and counts and also demonstrating good and bad practices. Thematic questionnaires, resident forums, the role of the media, the problem collecting on map, the site visit of troubled areas and common thinking on solutions, work groups, professional forums, and the communication towards the decisionmakers, the NGOs, other stakeholders and towards the customer were also discussed.

The next topic was the communication regarding the vision, goals and measures of the SUMP. Delegates discussed the dilemmas of shaping future vision, forming common vision, city leader’s vision, residents’ involvement, validating the vision and the objective system. Who are the target groups, what are the goals, decisionmakers’ communication, communication with professional partners, the professional background for choosing measures, communication towards residents like budget allocation or project market games, representative public survey or scenario development application or letting the people decide what colours the tram will have.

There was also a session about the tool kit for constant communication. These are ways to communicate the implementation, maintenance problems, monitoring & evaluation, raising awareness and systematic communication. This session was full of examples from different countries.

The third day began with an introduction round, after which Dr. Wulf-Holger Arndt from the CIVITAS PROSPERITY partner DIfU held a presentation about the definition and trends of city logistics and the understanding of the urban problems of freight. He spoke about the volume of commercial motivated urban transport, the background and trends of the urban freight transport (UFT) and its environmental impacts, new production concepts, e-commerce, the expansion of online commerce combined with transportation, which causes the growth of the ratio of no-load runs. Dr. Arndt talked about the emissions (CO2, NOx, solid particles and diesel exhaust gas, noise). He emphasised that the infrastructural damage costs might be forgotten costs.

In the third part the urban freight solution was presented. This session provided an overview about the measure activity fields of municipalities; like low emission vehicles, loading zones, cooperation among the recipients and among the transporters, territorial concessions, etc., which are generally low-cost solutions. Participants were able to take part in some interactive group work, as well: delegates discussed the main problems of their home cities and these were categorised.

Next, there was a presentation from the champion city, Dundee by Mr. Ewan Gourlay on behalf of the City Council. After shortly introducing and positioning his city, Mr. Gourlay described the levels of transportation policies on national (NTS), regional (RTS), local (LTS) and transportation company levels. He made participants familiar with the aims and measures in Dundee’s SUMP and showed them examples for Dundee’s LTS projects, like strengthening trust in PT services, smartbus, central waterfront development and partnership for the optimisation of bus punctuality. He spoke about speed limits (locally 48 km/h in general, but in Edinburgh 32 km/h). The audience were given an overview of the city’s sustainable urban logistics plan (SULP) – the plan goals, short run, middle term and the long run objectives and monitoring. The last part was about stakeholder involvement: overview, phases, RTS, SULP and the Tay Cities Deal.

After the presentation, delegates were taken on a site visit and Dr. Oláh pointed out features in the downtown area such as bicycles lanes, bicycle racks, speed restricted zones, the boulevard-like wide pavement of the inner ring covered by klinker bricks and the bus/tram lane also on the inner ring. Participants visited the Dugonics square, which was reconstructed as a pedestrian-cycling area and walked through the Somogyi Street, which is also partly (that means on the weekends) closed for individual motorised traffic. In front of the Art Hotel there was a bus provided by the city’s transportation company, to let delegates see the more remote locations of the city. Observations included tram lane sections built in grass, a huge turbo type roundabout, covered B+R facilities, third ring of the city with bicycle lanes on both sides, new PT stops and any more elements.

On the last day of the conference delegates attended the interactive presentation of Prof. Tom Rye from Edinburgh Napier University regarding the monitoring & evaluation (M&E) of SUMPs. After a short introduction round Prof. Rye spoke about the necessity of monitoring, its position in the SUMP process cycle and what are the key requirements of M&E. Prof. Rye discussed in detail why there is a need for aims in SUMPs, what are the types (capacity type and result type) and how to define and measure the aims. Delegates also discussed common problems like ’we don’t know what to do with the measures’ or ’we don’t have any data’. Examples for indicators from other cities’s SUMPs (Edinburgh LTS, Ljutomer, Gdynia, Nottingham, York) were also presented - Prof. Rye discussed communication of progress for the public. Delegates took part in group work to choose aims, indicators and measures to clarify the relationship between them. Finally Prof. Rye summarised the key messages of the M&E topic, such as; striving for simplicity, having a reasonable number of aims but not being afraid to include partial objective data - and of the complexity of data collecting.

Delegates agreed that it was a very useful training session. On national level it was also a good opportunity to keep in touch with colleagues who are already active in the national CIVINET network (Magyar CIVINET) and to widen the club of committed colleagues responsible for city development and transportation matters, possibly also as newcomers in the national CIVINET network or participants on its events.

Szeged was very proud to organize the event and we also had the possibility to show not only our city’s achievements on site on the site visit tour, but also to show off the city’s tourism and gastronomy!