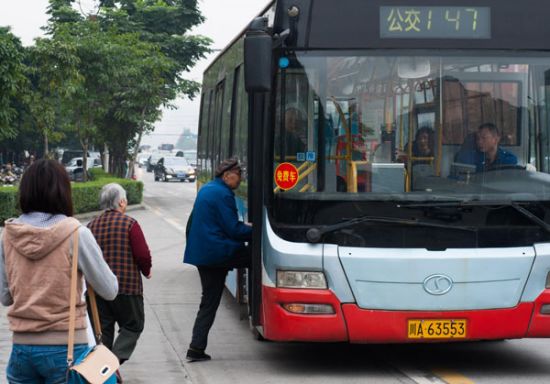 Chengdu, capital of the Chinese Sichuan province, introduced free public transportation on 33 bus lines within the main city centre. The initiative comes at the same time as local authorities introduced traffic restrictions in the area where the free buses will operate.
Chengdu is a Chinese metropolis with more than 14 million inhabitants, 7.6 million of whom live in the core urban area. As capital of Sichuan province it is also the cultural and economic centre of south-western China. Currently Chengdu has 2.1 million registered vehicles; the number of vehicles has annually increased by 20% since 2006. The city’s roads are not capable of handling this rapid growth and are heavily congested, especially during rush hours. The average road speed has dropped to 13 km/h.

Road traffic is currently the major source of pollution in Chengdu. Until now, counter measures like building a subway system for big construction sites or building and expanding roads, have made the situation even worse. The city has now started several push and pull measures to cope with the problems.

Since 8 October 2012, Chengdu has restricted vehicles driving inside the city centre based on the last two digits of their number plate. There are no restrictions on weekends and between 8 pm and 7:30 am. Since 10 October, a total of 33 buses in the same area have operated free of charge and additional 11 free bus lines will start operating by the end of October. In addition, the local subway operator grants a 20% discount on fares when using electronic payment cards.

Tu Zhi, deputy director of the Transport Committee of Chengdu, said Chengdu will have another 2,000 buses on its streets by the end of this year and elderly residents will be permitted to take a total of 900 free bus rides every year.

The future will show if Chengdu’s public transport system is capable of coping with the free fare measure. Xinhua news agency reported that larger-than-ever crowds were drawing to bus and metro stations on the first day. Many people complained on Sina Weibo, China's popular microblogging service, that they could not catch a bus in the morning.