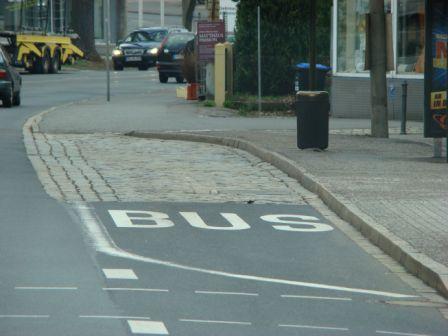 For the EURO 2012, a new bus lane is being installed in the ?wirki i Wigury Street in Warsaw, a thoroughfare leading from the Warsaw International Airport to the city centre. This will give priority to UEFA members’ vehicles, among others.
The ?wirki i Wigury Street consists of carriageways with two lanes each for the most part, connecting the main airport of Warsaw with its centre. It is also a part of the access road to the National Stadium, where some of the EURO 2012 matches are to be held. The authorities of Warsaw have recently started to put yellow stripes on the roadways, designating a new bus lane.

The bus lane will be accessible for public transportation, taxis, and vehicles with UEFA identifiers. This means free access for players, referees, anti-doping- and some other UEFA-employees. These individuals will also use the existing bus lanes in some further city routes on the way to the stadium.

The new bus lane regulation will be effective for the duration of the EURO 2012 in Poland and Ukraine (2 June- 2 July, 2012), around the clock and on both carriageways. With a total length of about 5 kilometres it will be one of the longest bus lanes in the capital of Poland. It will be discontinued when the championship ends.