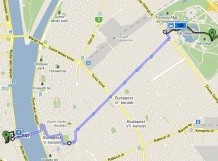 As well as the internet, Google’s service is available also on smart phones and a range of embedded applications. Travellers can calculate how much time a journey would take and also the ‘best’ way to reach their destinations by comparing various options: i.e. going on foot, or taking public transport with the least amount of interchange, or with the shortest travel time.

This new service is an addition to the already existing travel planner on the home page of the Budapest Public Transport Company. It is especially useful to foreign tourists, who can acquire information on an interface that they are already familiar with and which uses their own language.

The new information service was developed between the Budapest Transport Centre (a central coordinating body for urban mobility in Budapest), the local public transport company, and Google.