Budapest example confirms that traffic restriction does not cause chaos (Hungary) 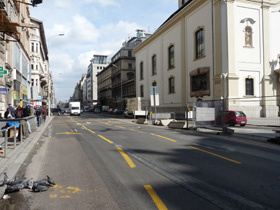 In the transport professional community the concept of traffic evaporation is widely known and documented. However, proposed traffic restrictions keep on being opposed by local media and by various stakeholders. Budapest demonstrates yet another example showing the opposite.
Over the past few decades there have been a number of large construction works in Budapest with major traffic routes closed to car traffic. Examples include the construction of a new metro line that affected some major junctions, the reallocation of road-space in central areas and the rebuilding of two main bridges over the Danube (all documented in earlier Eltis news items and case studies). In every case, there has been major media counter-campaign beforehand - but in reality fears were not realised in any of the cases.

At present, the construction works of the last phase of the Heart of Budapest programme are in progress, to revitalise the central areas of Budapest by converting public road spaces into areas of soft mobility and leisure. Currently, road lanes are being eliminated from the most important cross-through road and already within only a few days after the street's closure, the traffic has accommodated the new situation. The collected data demonstrates that traffic has evaporated and that the reduced road capacity can handle traffic just as well.

Additionally, one lane was eliminated from the 2x3 lane urban motorway in each direction - i.e. one remains now as a bus lane and the other one as a regular traffic lane. The traffic data shows a slight reduction in overall road usage, and no increased traffic congestion. Although at some escape routes slight increases were recorded, in general it can be stated that traffic indeed evaporated and fears of congestion were groundless. Now, with early-stage data at hand, construction works continue to turn the reduced road space into a friendlier environment for locals, public transport users, cyclists and pedestrians.