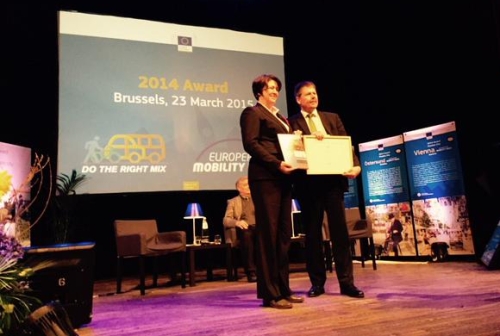 The European Commission has awarded Bremen (Germany) and Östersund (Sweden) for their important work on furthering sustainable urban mobility in their cities.

Representatives of the two cities were presented with their awards at a ceremony in Brussels on 23 March.

EU Commissioner for Transport Violeta Bulc said: ‘These cities found creative and innovative ways of improving the urban environment using cleaner transport solutions. I would like to congratulate all our finalist cities for tackling their own individual challenges with such dedication and determination.’

SUMP award finalists Dresden (Germany) and Ghent (Belgium) were complimented for their long-standing commitment to sustainable urban mobility and for being examples of best practice in monitoring and evaluating, while Thessaloniki (Greece) received a special mention for the ongoing implementation of its SUMP despite a difficult working environment.

EMW Award finalists Murcia (Spain) and Vienna (Austria) were also praised for their efforts during the week.

Case studies detailing the work of the SUMP Award finalists will appear on Eltis over the coming weeks – starting with Bremen’s, which is now online.