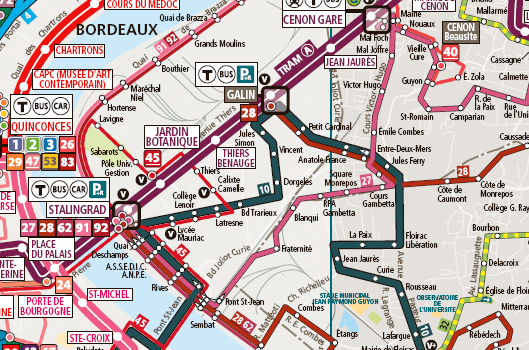 Bordeaux Metropole faces the challenge of providing an efficient and accessible public transport system for 720.000 inhabitants. Moreover, the Bordeaux Metropolitan Area serves 1.1 million citizens.
Bordeaux has grown rapidly over the past decade. The city was faced with an influx of traffic and identified the need to develop an alternative mode of transport.

The tramway plan in Bordeaux

In 1997, the city adopted the tramway plan and today the tram network in Bordeaux consists of 3 lines built at a cost of €1 billion. The network covers 44km, with 33km of extensions scheduled for 2013 and a fourth line planned in 2016, increasing the network to around 80km. The tramway network in Bordeaux has several notable features which have helped secure its success and retain the character of the city:

Today, Bordeaux’s transport system represents an average of 100 million trips per year. Around 63% of all journeys on the public transport network are made by tram, and in 2008 the trams carried around 54.7 million passengers.