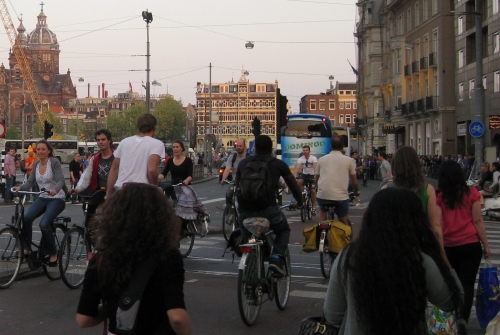 There is more and more recognition of the need for separate, protected cycle lanes in cities, but the problem of how to safely negotiate intersections remains for cyclists. An urban planner in the USA has come up with an innovative solution.
Urban Planner Nick Falbo has developed a concept for protected intersections for cyclists, allowing car traffic, cyclists and pedestrians to get across intersections safely and quickly. Using existing Dutch designs as a model, he has developed a concept that continues the protected bike lanes throughout the crossing. Traditional methods, such as mixing car and cycle traffic together when turning, is not a safe option he claims.

There are four main elements to his design. A raised barrier protects cyclists from cars as they wait to cross, and cyclists stop ahead of cars travelling in the same direction. This makes them more visible to waiting cars, gives them more time to move when the lights turn green, and their crossing distance over the road is also much reduced.

Pedestrian and cycle crossings are also set back from where cars cross, so that car drivers can easily see if a cyclist or pedestrian is crossing when they turn. Traffic lights work with a system called 'bicycle friendly signal phasing' to prevent conflicts arising between cyclists and cars. A short video has also been produced, explaining the way that the design functions.