Bicycle traffic is booming in the Cycling Capital Munich (Germany) 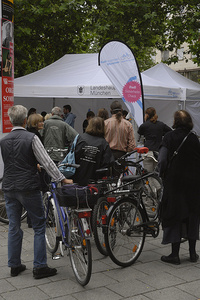 The targeted campaign Cycling Capital Munich was evaluated at the end of 2011, revealing promising results including a marked increase in cycling in the city.
Starting in 2010, the campaign Cycling Capital Munich aimed to increase bicycle traffic and improve traffic safety in Munich. It sought to motivate residents to use their bicycles more often in everyday life and to establish a true bicycle culture. The campaign delivered measures to promote bicycle traffic in Munich and communicated the various advantages of the bicycle as an ideal urban means of transport. Numerous activities and events aroused the interest of citizens not yet completely convinced about cycling.

Now, at the end of 2011, the campaign has been evaluated. The evaluation analysed the mobility behaviour of the citizens, among other things. It shows that from 2002 to 2008 bicycle traffic in Munich increased by almost 40% (from 10% to 14% modal share). A methodologically comparable survey in 2011 found a bicycle traffic share of more than 17%, corresponding to a further increase of about 30% in only three years.

However, it is not possible to make a scientifically reliable statement of the exact impact of the campaign on the strong increase of bicycle traffic in Munich, due to the fact that other measures might have also played an important role in this development. For example, the continuous improvement of the bicycle infrastructure and the general positive trend towards more everyday cycling may have also contributed to behavioural change.

The population of Munich and the surrounding area is expected to increase by about 70,000 inhabitants within the next 10 years. Due to capacity limits, public transport and motorised individual traffic, it can be assumed that a considerable number of these new inhabitants will use the bicycle for more than the average amount of trips. Consequently, Munich also expects an additional strong increase in the bicycle traffic share in coming years.

On the 22nd of November the city council decided to continue the municipal public relations work for bicycle traffic under the brand name “Cycling Capital Munich“, until 2014. Current dates, activities, events and videos as well as other information regarding the Cycling Capital Munich can be found here (in German).

An Eltis interview with the Mayor responsible for transport, Mr. Hep Monatzeder, gives interesting insights into the bicycle policy of the City of Munich. See http://eltis.org/index.php?ID1=4&id=79
Country:
Germany
Topic:
Walking and cycling