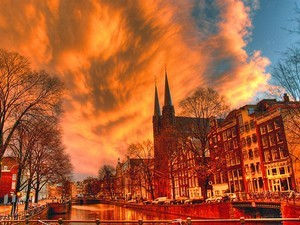 During its last exhibition, the Worldwide Association for Electric Vehicles congratulated the city of Amsterdam for its commitment to electric vehicles.
Each year actors in the field of sustainable mobility are awarded by the World Electric Vehicle Association (WEVA). It awards the E-visionaries for their exemplary role on the international scene. In the beginning of November, the city of Amsterdam, the city of Shenzhen (China) and the State of Oregon (United-States) were distinguished for their policies supporting the development of electric vehicles.

In March 2009 the City of Amsterdam announced its intention to reach a volume of 200,000 electric cars in circulation within thirty years, and allocated a budget of €3 million to encourage private companies to change their traditional cars by electric ones. The project envisages a subsidy from €15,000 to €45,000 for the purchase of an electric car and a no-claim bonus going up to €250,000 for the purchase of a 20 vehicle fleet. The city also promised the installation of 200 terminals, free of charge by 2012. The city of Amsterdam chose a system of recharging (technology 365-Energy Group) functioning with magnetic cards, which will make it possible for users to pay an annual subscription and to refill their vehicle in the whole agglomeration. This technology has the advantage of functioning in network, with the constant sending of information to the managers and the users to optimize the management of the terminals.