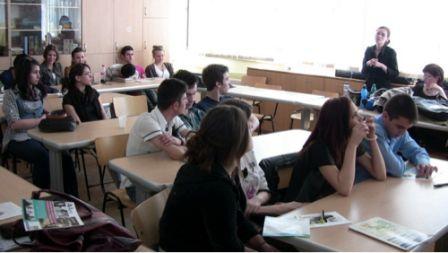 On 5 April 2012, the Active Access project team discussed sustainable urban mobility and alternative transport means with high school students in Bucharest.
Under the name “The Different Week” and as part of the National Education Programme, the week 2-6 April 2012 was dedicated to extracurricular activities in schools all over the country. The Active Access project team was invited to raise awareness among pupils and teachers from “Timotei Cipariu” High School, Bucharest, about the benefits of alternative urban transport for short trips.

For more than 3 hours, children from the 10th and 11th grades, aged 16-17, were engaged in a prolonged debate with the organisers on environmentally friendly mobility to and from school. The project’s brochures, the PowerPoint presentation and video materials prepared by the organisers formed a comprehensive overview of this subject.

After the project’s objectives and activities were presented, two guests from Bucharest Community of Cyclists (CBB) were invited to speak about the benefits of cycling in Bucharest, the infrastructural challenges, and tips & tricks on rapid and safe transit in the city by using existing or creating new shortcuts.

The students were especially interested in the idea of safe daily cycling between home and school. Video materials with best practice examples from cycling friendly cities around Europe raised their curiosity and encouraged them to start cycling on a daily basis.