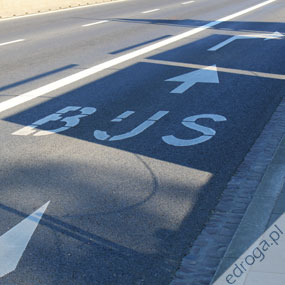 Bus lanes are one of the best ways of improving urban public transport. Due to this fact, the Polish city of Olsztyn wants to improve its bus travel in the city centre by building 7 km of new bus lanes.
Implementing the project called „Modernisation and development of integrated public transport in Olsztyn”, the city authorities have signed a contract for building ca. 7 km of bus lanes. The whole investment will be completed within two years at a cost of over 21 million PLN (ca. €7.75 million). The first 12 months will be spent designing the new layout.

Seperate bus lanes are being developed in many large Polish cities (such as Warsaw or Krakow), but they also work well in smaller municipalities such as Bialystok, Kielce or Olsztyn.