60 g/km by 2025 is possible with existing technology 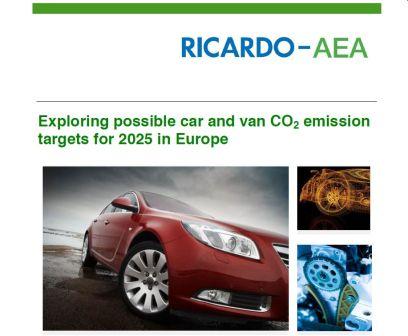 The right mixture of electric, hybrid and conventionally-fuelled cars could enable Europe to reach 60 grams per kilometre from the average new car in 2025 with technology costs likely to be paid back within a few years.
In 2011, the average emissions from new cars sold in the EU was 136 g/km. A 95g target for passenger cars has been set for 2020, the target for vans is 147g/km. The Commission did not propose further standards for 2025.

A new report by the British consultancy Ricardo-AEA and commissioned by T&E and Greenpeace suggests the EU can more than halve its existing carbon dioxide emissions from new cars with existing technology.

The T&E/Greenpeace study shows that a target of 60g could be achieved if up to 24% of new vehicles were electric, another 24% hybrids and the remaining 52% conventional (petrol and diesel) cars. A target of 70g would require only a modest share of electric cars (7%), which is at the very low-end of conservative market projections for electric vehicles by 2025. The remainder would come from hybrids (22%) and conventional petrol/diesel cars (71%).

A supporting briefing prepared by T&E shows that the costs of technology are likely to be paid back within a few years. It outlines the arguments for setting strong 2025 targets and explains why industry arguments for delaying these targets are unfounded and would set back progress.

Download the report and briefing paper: Transport and Environment