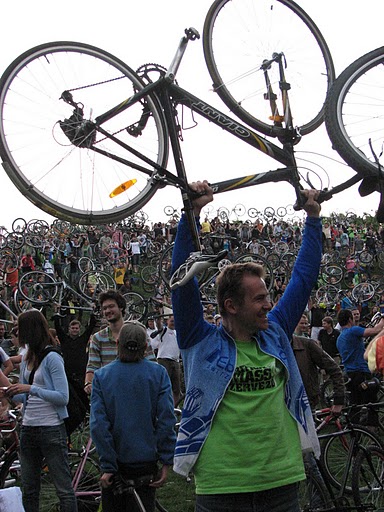 Following the example of the first Critical Mass cyclists’ demonstrations in San Francisco (USA), the Critical Mass demonstration in Hungary has developed into a real success story with modal split of cycling increasing 10 fold since its inception in 2004.
This year’s edition was held on 30 April - which corresponded with the national celebrations of the Netherlands. That day is the birthday of the Dutch Queen (Koninginnedag) and for this year’s edition of Critical Mass this served as the motto of the event: “Critical Mass Budapest greets the Netherlands”.

It is the clear objective of the organising NGOs to follow the example of the Netherlands: to turn cycling from a free-time activity into a mainstream means of mobility, especially in urban areas. The event attracted 30,000 participants, making it the world’s largest Critical Mass demonstration. When the Critical Mass demonstrations were started in Budapest in 2004, cycling was a very marginal activity, with a modal share of 0.5%. Now the number of cyclists grows by as much as 50% every year, with modal split increasing to almost 10 times the level of 2004.

As a gesture towards the cycling nation of the Netherlands and to pay respect to their example and vision, the organisers greeted the Dutch queen in public. The Dutch government was officially represented at the event to receive the good wishes: the event was opened by the Dutch ambassador in Budapest and before the culmination of the event (lifting all bikes) he received the official letter of greeting from the Queen.