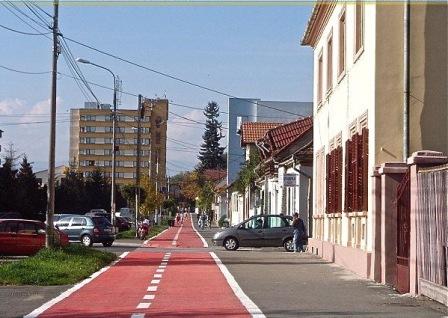 The city of Sibiu has inaugurated 10 new bicycle lanes, adding a total length of 17km to its network. Initially, the city had only one route of 6,5 km, but due of the lack of continuity it was nearly impossible to use bicycles as an alternative transport mode.
After implementing the 17km of cycling lanes the Central Square is linked to all the peripheral residential areas. The mayor of Sibiu stated at the inauguration that bicycle lane construction will never end. These 17km represent only the first step in developing the bicycle infrastructure in Sibiu. The next step would be to complete the existing radial scheme with a ring that connects the city’s residential areas.

The municipality officials responsible for the infrastructure development, want to give priority both to pedestrians and to cyclists in the city by making space for cyclists along the roadside and not on the existing sidewalks, which are already overcrowded.

The project was implemented in 3 months by a local construction firm (S.C. DPC S.A.). The lanes have a special red coating that distinguishes them from the rest of the road. The width of the lanes is just 1 metre on each side, but the cyclists say it is sufficient for the time being.

The number of cyclists has increased considerably in the last months, as a result of the construction of the lanes and the Critical Mass recently organised on the newly opened routes.