10 days without a car: An official experiment in Lodz (Poland) 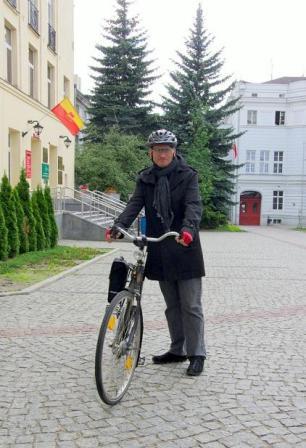 In mid-May this year, the Vice President of Lodz carried out an experiment. For more than 10 days he resigned from using his official car in favour of travel by bicycle and public transport.
The Vice President of Lodz, Mr Radoslaw Stepien, is responsible for running public transport and street maintenance in Lodz. For daily commuting he uses his official car, travelling a distance of 17 km from a rural area to the city centre. However, recently he gave up using his car for 10 days to see in practice how to move around town without his own four wheels. At first it was hard to imagine official travel in a big town without the proper representative vehicle. Despite initial worries, the experiment turned out to be a great success.

The test began on May 9. The means of transport available to the Vice President were buses, trams, bicycles and walking. Mr Stepien mainly cycled. On the first day he did 40 km. He also had the opportunity to check whether the free bike carriage on public transport introduced in March this year functions well. He noticed that cycling supports mental relaxation, for example, after an intense day of work. On two wheels he travelled to business meetings, and even once to Warsaw (doing part of the trip by train). People could follow the test by viewing the postings on his Facebook profile.

The Vice President found the experience very useful for his future actions and his daily business. He has discovered firsthand which infrastructure is needed and what modifications in the overall transport system of Lodz are required. By sharing this experiment on the internet, Mr Stepien promotes sustainable mobility and encourages residents to leave their cars at home.