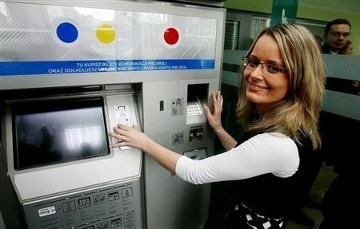 URBANCARD is a modern chip card that has been used in Wroclaw since May 2010. The card replaced traditional paper period cards. It is personalised, so it can be identified or replaced if lost. The card incorporates student cards and payment cards and can also be used for entering the city zoo and swimming pools.Wroclaw authorities are planning to widen the range of the card’s use even further, making it a City Card for all kinds of urban activities.

Until May 2010 seasonal tickets for Wroclaw’s public transportation were available only in a paper form. The main disadvantage was that there was no way of replacing them in the case of a loss. The tickets would be mainly distributed by street kiosks.
In line with today’s technology, the authorities of Wroclaw decided to implement the URBANCARD, a card with an electronic season ticket function. Afte this, the functions of the card were extended to include other services in the city.

The URBANCARD operator is the Polish Mint. The development of the concept began in 2005, but the contract with the operator was not signed until 2009. In May 2010 the first customer service locations to sell the card were opened. The first stage of the project ended in January 2011. The URBANCARD also became universal in the way it can be bought, including by internet and mobile phone. The card can be integrated with other compatible card systems including student card, payment card and work time registration card.>The URBANCARD can operate not just as a seasonal ticket for the town’s public transport, but also as a payment card for entering the city zoo and swimming pools and for a public bicycle rental system that was introduced in 2011. URBANCARD owners get additional discounts from different institutions operating in Wroclaw, for example banks. In one of them a 10% discount on the seasonal public transport tickets is offered if the URBANCRD gets integrated with the bank’s payment card.

The URBANCARD system has been well accepted by the residents of Wroclaw. Some minor problems with the card selling machines were solved during the process of implementation. Personalisation of the card is one of it greatest advantages as it can be easily regenerated if lost. “Financial charging” of the card can be done using machines on the streets, at customer centres, and via the internet and mobile phones. By the end of 2010 there were already 115,000 cards operating Wroclaw, a town with a population of 650,000. Market analysis confirms that 84% of residents support the project. The future development of the card system includes car parking payments, football match passes, loyalty programs and even voting for the town councillors. New options will be introduced gradually.