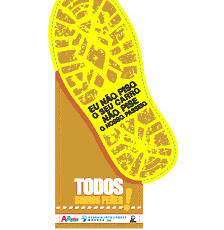 The specific objective of this campaign was to raise awareness of motorists to illegal pavement parking, giving residents and city users in general the ability to reprimand badly behaved motorists.

Over the last three decades, the Municipality of Aveiro has focused on the quality of public space in the town centre. In 2000, Aveiro became a pioneer in Portugal with a free bike share scheme, “BUGA”, but previously had undertaken considerable work in improving the environment for pedestrians in its historical area. Aveiro also had plans for revitalisation of local commerce in its city centre.
Within the Intelligent Energy Europe funded project Active Access (August 2009- July 2012), came the opportunity to implement measures to change the behaviour of citizens, to promote walking and increase their awareness of quality of public space.

As a result of the experiences, the campaign “All of us are pedestrians” was designed and implemented.

This campaign aimed to encourage pedestrian mobility, improve the local economy, raise the awareness of car drivers and give residents the ability to reprimand motorists and take care of their street.

Raffles of shopping carts - "Win Wheels to Shop by Foot" is the slogan that shopkeepers exhibited in their shops, to encourage their customers to enter the raffle to win shopping carts. The Association of Shopkeepers ran the raffle. The prizes of shopping carts were to answer one of the main complaints about shopping on foot - the weight of carrying goods - and to modernise the image of who uses the local commerce.

Awareness raising leaflets – sent to all residents of the intervention area, accompanied by a letter from the mayor, outling the concern illegal parking causes the movement of pedestrians, in particular those with reduced mobility, but also the negative impact it has on the image of public space and the physical damage caused by that behaviour. Residents and shopkeepers were empowered by being given the opportunity to post leaflets on the windshields of illegally parked cars and thus assert their rights.

Active Access Street Posters - near the main squares and pedestrian areas, the posters warned of the damage that illegal parked cars cause - both to the movement of pedestrians, but also In the degradation of public space and the cost for public institutions.

For a project of this kind to be successful in changing the behaviour of citizens, the following proved essential: