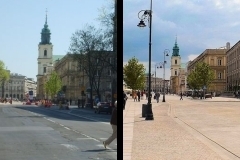 In 2008 the municipality of Warsaw, the capital of Poland, has renovated a part of the Warsaw Royal Route, converting a neglected normal city street back into elegant old-style pedestrian zone

The Krakowskie Przedmie?cie Street (eng. Krakow Suburb) is one of the oldest, most important and prestigious streets of the capital of Poland, situated in the Old Town of Warsaw. With its total length of 1.1 km, it begins at the Royal Castle linking it with some important institutions in Poland, for instance the Presidential Palace, Warsaw University and the Polish Academy of Science.

At the beginning of the 21st century the municipality of Warsaw decided to redesign the, until recently, ordinary and for years neglected street and to give the area a look that better matches the many Baroque- and Classical-style churches and palaces built along this route. The street would be restored to its previous grandeur and become a pedestrian zone with restrictions on traffic.

The renovation work was divided into two parts, the first part in the southern section (8 months duration), then in the northern section (11 months). The roadway of four lanes has been narrowed down to seven meters and two lanes - one lane in each direction, accessible only for buses of the public transportation company, taxi and special vehicles, such as the presidential convoy.

The pavements have>become wider, giving space for new style benches, bollards, planters and glass painting reproductions of Bernardo Bellotto (also known as Canaletto), showing the past architecture of the street. Several dozens of trees have been planted. Unfortunately, the street has not been fully adapted for disability access and cyclists.

Referring to the appearance of the street in the paintings of Canaletto, special yellow granite imported from China has been used to imitate the pavement surface color of the eighteenth century. This solution has proven to be impractical, particularly in parking spaces but also in other prohibited locations, where leaking cars have left oil stains.

The total cost of renovation was estimated to be around 11.1 million euro, but the finished cost was almost twice as much as the estimation and it took over a period of two years to complete the project.

After the completion of the renovation of the Krakowskie Przedmie?cie’ street, nine bus services now serve the route, although only a small proportion of the inhabitants of Warsaw wanted to restore traffic in the newly renovated route. As such the entry restriction for private cars has been met with approval of the Warsaw community. The street is now visited by more tourists than ever, and has also become a place for people to come and enjoy large social events and celebrations.