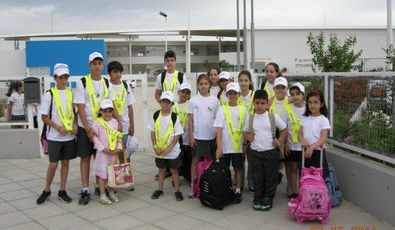 Within IEE funded Active Access, a well established, Europe-wide project, a Walking Bus has been introduced in Cyprus for the first time.

Nicosia, capital of the Republic of Cyprus and largest city on the island, is faced with critical traffic problems. Urban transport policy has been characterised by a preoccupation with the private car. As a result Cyprus has, at present, one of the highest car ownership ratios in the world (more than 600 cars per 1000 inhabitants) whilst also having very low usage of greener modes of transport. In the greater Nicosia urban area, the share of trips by public transport is only 3%, with cycling even lower at 2%. The continuous increase in motorised traffic has had a detrimental effect on the city’s environment (air pollution, noise, etc.). Road safety, quality of life and the city’s attractiveness in terms of business, shopping and living has been reduced. Road congestion also has economic ramifications associated with fuel consumption and lost working hours. Currently the use of motorised transport, even for very short distances, is the most ‘common’ solution in Nicosia. Walking is undertaken only at the start and end of a motorised trip. Poor safety conditions on roads also help to create a hostile environment for pedestrians.

The organisation and successful implementation of the Walking School Bus (WSB) project in Nicosia was a real challenge for the researchers of the Cyprus Centre for European and International Affairs (CCEIA) at the University of Nicosia. As this was the first time such an activity had been organised in Cyprus, it demanded an in depth examination of traffic behaviour, networking, involvement of all relevant stakeholders and excellent organisation in order to create a good impression. The most difficult aspect of the project however was not to convince children to participate but to convince parents to become volunteer escorts.

Implementation was scheduled step by step. At the beginning researchers contacted relevant authorities (Ministry of Communication and Works, Municipality of Engomi, Ministry of Education and Culture and Cyprus Police Department) to inform them about the program, present the concept and request their active involvement. Each authority undertook supportive actions, related to its duties and responsibilities, such as cleaning and improving pedestrian lanes, designing and introducing informative signs (for car drivers) on the Walking Bus routes, and organising educational seminars on traffic safety for children and their escorts. In the meantime, CCEIA researchers contacted the Headmaster of the Makedonitissa C Elementary School and with his support they presented this innovative idea to the School’s Parents Association. With the conclusion of this informative section, the researchers proceeded to the survey phase.>They designed, pilot tested and distributed a questionnaire to all the pupils of the school in an attempt to assess their daily transport habits. Through this survey, the need to introduce the Walking School Bus became evident.

After the conclusion of the survey all relevant stakeholders and parents were invited to an event where the survey findings as well as problems resulting from the daily use of the cars both on human health and on the environment were presented and discussed. Furthermore, at this event, parents were informed about the step by step organisation of the Walking School Bus; and their assistance and support in determining the most efficient implementation of this action was highlighted. Finally, the CCEIA team distributed and collected questionnaires for pupil participation and, in collaboration with relevant stakeholders, formed the WSB routes and escort rosters.
CCEIA coordinated and supervised 2 WSBs at the Makedonitissa C Elementary School in May/June 2011 and May/June 2012. During the first attempt the WSB included 3 different routes while in the second 2 routes were formed. In both cases the WSB operated on a daily basis (morning and noon). Each route included 12-15 children and 3 adult escorts. Local media were very supportive, positively promoting this new activity with reports in featured shows, news broadcasts and in newspaper articles.

An important factor in the successful implementation of the WSB was the harmonious collaboration among stakeholders and all participants. Every single person had something to contribute and this was acknowledged by all. The children were very excited and willing to participate, attending seminars on traffic safety and showing great discipline during the walking to/from school.

Furthermore, CCEIA efforts to sustain and further promote this idea do not stop with Active Access. At the present time CCEIA, in collaboration with the Ministry of Communications and Works, is organising another WSB at the Makedonitissa A Elementary School through an initiative of the Ministry. In addition discussions are ongoing with the Ministry of Education and Culture aimed at institutionalising the WSB and introducing it in all elementary schools, acting as consultants and trainers where relevant.