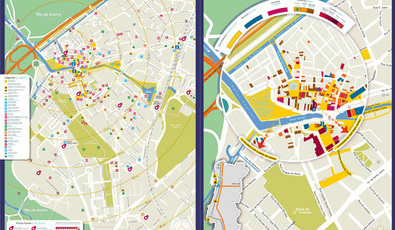 The walking map was designed as part of the Active Access Project which aimed to encourage pedestrian mobility. The specific objectives of the map were to raise city-users awareness of walking, to change their perceptions of walking distances, their mental map" of the city, and ultimately their behaviour.

In the last three decades, the Municipality of Aveiro has become increasingly concerned with the quality of public space within its town centre. In 2000, Aveiro was a pioneer in Portugal with the introduction of the free bike share “BUGA” system, although, had fallen behind in improving conditions for pedestrians within its historical area. Within the STEER funded European Project Active Access (August 2009- July 2012), an opportunity arose to implement measures to change the behaviour of citizens by promoting walking and increasing their awareness of the quality of public spaces.

Walking Map, 1st Edition - This edition targeted residents and shopkeepers of Beira-Mar (city historic center). Apart from showing all shops, services and facilities in the area, it displayed a system of footprints that alternate in 4 colours, repeated to represent every 'walking minute' so it was very easy for users to calculate the time required to walk for each route.

Walking Map, 2nd Edition - This bilingual edition of the map was intended for all users of the city. With contributions from several experts it aimed to highlight the pedestrian scale of the city. It was designed to help change the perception of city users and to make them consider the viability of walking for most of their daily trips. The map displays comprehensive tourist information, showing points of interest and recommended walking routes. It also shows "accessibility circles" – a system of concentric distances within walking minutes spaced at 300 meters / 4 minutes. It identifies "Star Points" (main generators of pedestrian traffic), such as rail stations, universities, hospitals, and contains a table where users can see the distances by foot in minutes between each of these 10 star points.

The map was important in changing the perceptions of city users. By providing them with distances in walking minutes city-users became aware that many of their everyday journeys can be made easily on foot. It was also very important, and in combination with another project - Network CENCYL, that the map has been published in a large format and distributed throughout the city on billboards. The map will also form the basis of planned pedestrian directional signs, due to be installed in 2013.