Skip to main content
Home Discover Case Studies The Walking Bus: a healthy and social way to get to school in Sebes (Romania)

The Walking Bus: a healthy and social way to get to school in Sebes (Romania) 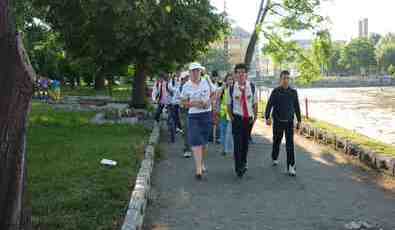 An ingeniously promoted Walking Bus exercise in Sebes has become a real social event with broader implications and offers the opportunity to correct the artificial development of Sebes as a car-orientated town.

Sebes is a small sized city with easily walkable distances, but which is suffocated by motorized transport. Very popular some decades ago, walking and cycling were slowly abandoned mainly because of fear induced by freight transport transiting the city. The adoption of motorized modes of travel, even for short distances, led to additional road congestion while discouraging active travel even more. Thus, despite its attractive natural and manmade environment and tradition for walking and cycling, Sebes has artificially developed as a car-orientated town.
Until the municipality’s involvement as a partner in the Active Travel Network (co-funded under the URBACT program), there had been no action supporting clean means of transport in terms of facilities for cycling and walking. According to the declarations of their parents, most local pupils are brought to school by family car, even for secondary school or the first years of high school.
Organised within the framework of the ATN Urbact project, the Walking Bus, implemented in May-June 2011, aimed to change attitudes towards active travel, generating a shift from car to walking. It was primarily aimed at pupils and, through them, at parents also.

Sebes municipality, together with ATU and with the full support of teachers and local police, conceived the Walking Bus exercise. The idea was introduced by representatives of schools in the municipality at the Sustainable Urban Mobility Local Support Group meeting on 17 February 2011. Everyone received the idea well, with some teachers showing more availability and willingness to carry out action than others. Safe routes to school were identified and marked by the organisers, with the help of teachers and parents. Participating children and guides were trained concerning traffic rules. There were 6 WB sessions organised in 3 consecutive weeks at the end of May and beginning of June, starting from 2 different points in the city and totalling 60 pupils. Older pupils, not initially planned, joined both groups.
The action was disseminated through posters displayed in schools and the city centre, meeting point signs, press releases and power point presentations adapted for various audiences. Following the success of the initiative and the extension requests from pupils, the local authority promised a larger scale repeat exercise with the possibility of ongoing action.

The WB registered a real success in Sebes, exceeding initial expectations especially regarding the unforeseen variety of social benefits. Together with its associated sustainable mobility implications, the event produced an important change of attitude concerning everyday travel choices. The triumph of the campaign owed a great deal to the active participation of teachers and also to police officers assisting with organisation.